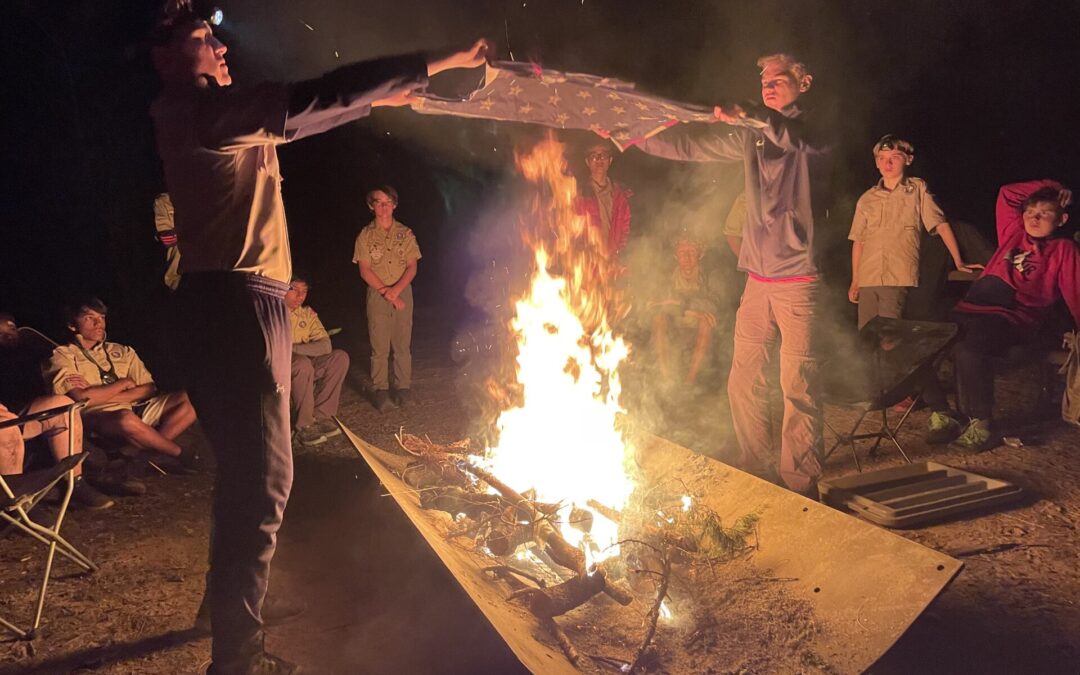 March brings a renewed since of energy and purpose; represented usually by basketball and brackets. However, Troop 221 has their own ideas of what March Madness looks like.  Though no hoops are involved, there is a sense of HOOPla around this campout tradition.

After awakening the camp with the blast of a firework rocket, patrols went straight into creative mode with breakfast – – oh, the mounds of food cooking was awesome! There was English egg muffins, sausage gravy with biscuits and omelets simmering in baggies. There was some learnings about how long to boil food in a bag and the observation from afar about how gravy can literally stick to your rib!!

After breakfast fun, the patrols started preparing to create their swords of choice. Which pool noodle would they choose? How to safely use a PVC pipe cutter so all would return home with their 10 fingers? Abundance of Duct tape and a mountain of socks surrounded the scouts. These components would be vital creations to form unique swords used to defend their land and orange flag!!   As the defenders of Skull ranch completed their creations, hunger returned. LUNCH!! boomed from their chests.

As the sun shone from above, the cool morning became a distant memory which had awakened us with the sweet sound of birds. Teams were formed to defend the land, referred to as Skull Forest. Off the defenders ran to play capture the flag with the strategy not seen since George Washington crossed the Delaware.  Circling behind enemy lines, flanking from the side, frontal assault and spies were all encountered. Several rounds were played as the sun poured its rays upon us all.  The flag was captured!! As with all fun events, they have to end and everyone was sad. Defenders called for first aid to tend to their their wounds and stories shared among the defenders amassed at the field about their war wounds caused by those pesky thorns.

In the late afternoon, the energy was palpable as dinner was started and the creative minds moved from defenders of skull ranch to tummy fillers! Enchilada pie, Lasagna noodle thingy and kabob meatballs were created. The adults sequestered in their corner devouring foods that the lone Eagle Scout proclaimed as the “best camp food” he’d ever eaten. Of course, the adults always have the best food!!

As the sunset across Skull Ranch, we walked out to the fields to find a curious structure we discovered was to become our bonfire. The vision of our Aggie host was to build a bon fire for the ages!! It was lit with celebratory fireworks and became the LARGEST BONFIRE EVER created by Troop 221.  As folks backed away from the lava generated to save our eyebrows, camera flashes were seen taking pictures of the fun filled evening.

As the fire quieted and the scorched earth remained as the only evidence of the EPIC bonfire, we headed back to camp where we gathered in uniform to reverently retire a tattered Old Glory.