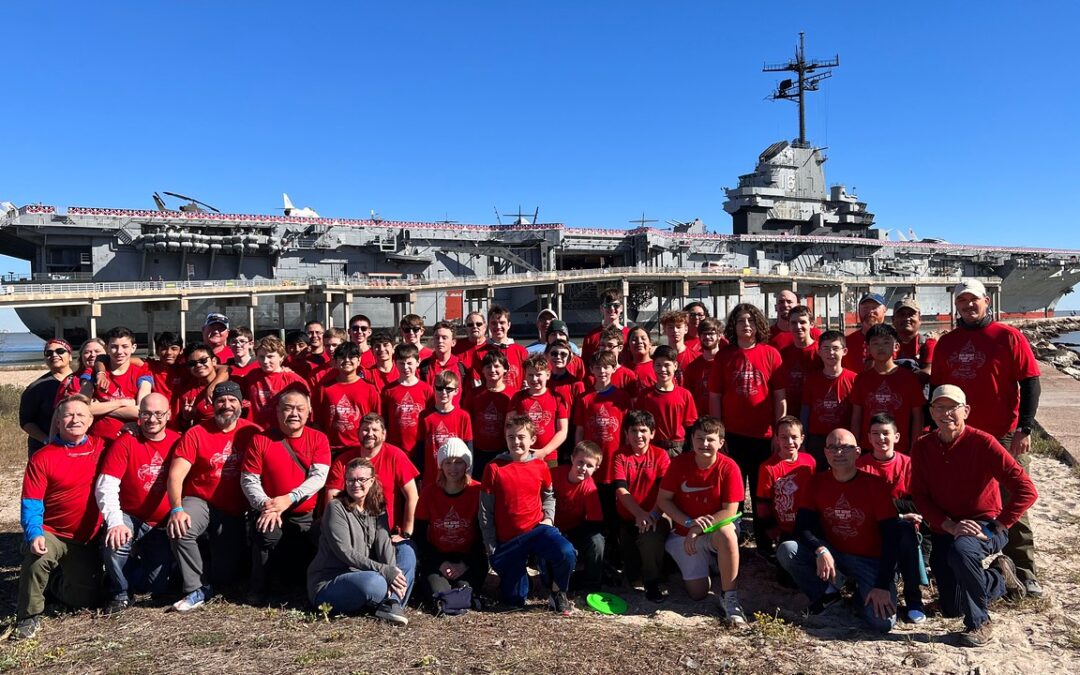 In January, Troop 221 took advantage of the 3-day MLK weekend and headed to Corpus Christi. We spent a couple of nights aboard the USS Lexington, a US Naval Aircraft Carrier that is now a museum. Troop 221 last visited the USS Lexington in 2002, exactly 20 years ago! So, the troop was very excited about this trip. 32 scouts, 6 Webelos, and 20 adults attended – our largest attendance on a monthly campout in years!

On Friday night, we left Custer Road UMC around 6:30pm with a caravan of 11 cars. Luckily, we left the trailer behind, since we did not need the troop camping and cooking gear. After a couple stops for gas, snacks, and bathroom breaks, we arrived at the San Marcos River Scout Camp around 11pm. Most of the troop slept on sleeping pads and mattresses on the floor of the camp chapel. A few adults decided to brave the elements and sleep in the “barndominium”, a 3-story, unfinished, metal frame structure with plywood floors and tarps on 3 sides of the walls. A cold front blew in with freezing temps and 25-30 mph winds, forcing a couple of those brave adults to sleep in their car!

We woke up Saturday morning and ate breakfast burritos that Scoutmaster Day picked up from a local taqueria. Then, we packed up and hit the road to Corpus Christi.  After an obligatory stop at the Buc-ee’s in New Braunfels, we arrived at the USS Lexington shortly after noon. Our host met us at the entrance and provided a brief orientation, which included 2 simple rules – no running and never be alone. Violating either of these would result in PT, i.e. push-ups, jumping jacks, and/or burpees!

We boarded the ship and were led to our sleeping quarters, aka “live aboard” berthing rooms, where scouts and adults slept in bunks that were stacked three beds high. For many of us, this brought a whole new meaning to “close quarters.” Needless to say, we did not spend much time in the berthing rooms. We dropped our gear and headed back to the hangar deck for burgers at the mess desk (aka snack bar).

The troop was dismissed, free to explore the ship on our own (with a buddy, of course). Many of us took one of Lexington’s self-guided tours. The Flight Deck tour showcased an F-14 Tomcat used in filming of Top Gun and an F/A-18 Hornet flown by the Blue Angles. The Foc’sle tour included a view of the equipment to raise and lower the anchors and an amazing Pearl Harbor exhibit. On the Gallery Deck and Lowers Deck tours, we saw the Captain’s cabin, Combat Information Center (CIC), and ready rooms – where the pilots prepared for their mission, the engine room, crew’s galley, dental clinic, sick bay, and a scale model gallery with over 440 pieces on display! There was so much to explore, we were lucky to have plenty of free time throughout the weekend, just to soak it all in.

At 4pm, we reconvened on the hangar deck and watched a short 3D movie on the history of air craft carriers. We then went through the chow line and ate dinner in the galley, getting a real taste for the sailor’s life. At this time, the Lexington closed its doors to the public, so we, along with a few other troops, had the entire ship to ourselves! After dinner, the troops participated in an patriotic flag ceremony before being dismissed again. We were allowed to explore the ship, this time without any of the other public guests. Most of the boys found their way to the lounge and game room that was only open to the “live aboard” guests. They watched movies,  shot pool, played air hockey, checkers, chess, and other games, and just hung out with friends!

Throughout the weekend, the boys went in groups of 8 or 9 to one of the two escape rooms on the ship: Beat the Blast – a mission to locate and diffuse a bomb to save the world – and Face Your Fears – a mission to find a group of ghost hunters on the (rumored to be) haunted Lexington. In the evening, one of our tour guides told ghost stories surrounding some real events that happened on the ship, while others enjoyed snacks in the mess deck (the nachos were a favorite of many). Shortly before 11pm, we headed back to the berthing rooms to get some much needed sleep. At 11pm, Taps was played over the loud speaker and it was lights out.

On Sunday at 6:45am, Reveille playing over the loud speaker woke us up. After breakfast in the galley, the troop split into 5 teams for a service project to wipe down all of the aircraft and exhibits in the museum. Not only did they get in some service hours, the boys explored areas that were not open to the public! After they completed the service project, we each took a turn on the flight simulator before leaving the ship for lunch at Pier 99. We enjoyed some amazing weather and great seafood out on the patio, which we had all to ourselves!

After lunch, we took a troop picture in front of the USS Lexington, then headed back to the ship. Some boys stayed on the beach and played in the sand, while others played games in the game room, did the escape room, or explored the ship. Some of the adults snuck away to watch the Cowboys game on their phones, but were not too pleased with the result. At 4pm, we watched another 3D, this one about fighter pilots, and ate dinner in the galley. Then, we spent another evening exploring the ship, eating snacks at the mess deck, hanging in the lounge, and playing in the game room. With all this free time – not having to setup camp or cook our meals – this was truly a “January chill” campout.

On Sunday morning, we packed up and took our gear to the cars, them returned to the ship for breakfast in the galley and Roses-Buds-Thorns (RBT) on the flight deck. Many of our roses were learning the history, getting to experience life a sailor, doing the escape rooms, playing games, hanging with friends, and simply enjoying all of the free time. Although there were not many buds or thorns, almost everyone agreed the sleeping conditions were not ideal, and we were all very ready to head home to our own beds. We left Corpus Christi around 10:30am and made the long drive back to Plano all in one day, arriving home between 7 and 7:30pm. For a “chill” campout, we sure were worn out from all the excitement!

And don’t forget to check the calendar to see our upcoming adventures!